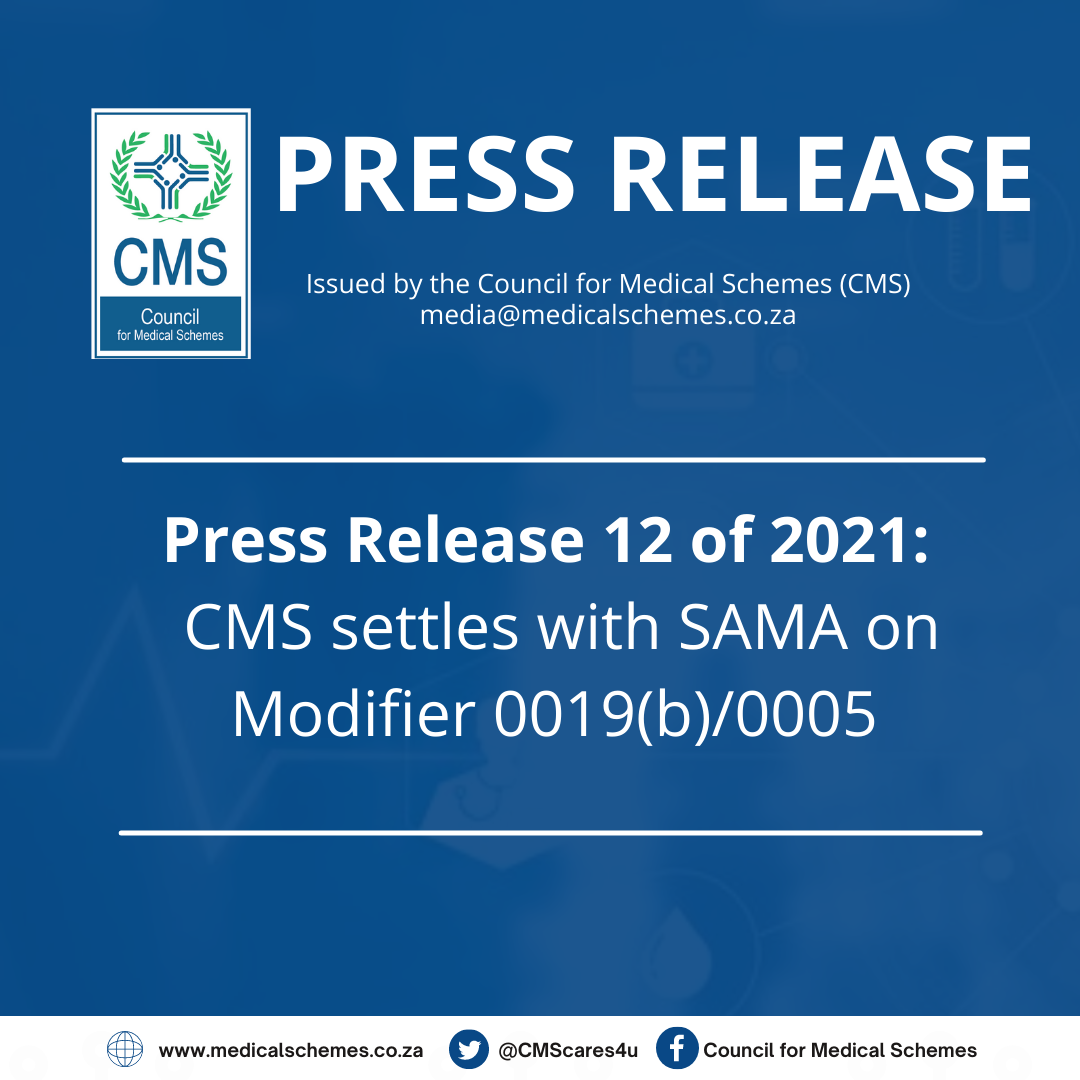 The CMS has concluded a settlement agreement with SAMA on the use of modifier 0019(b) and 0005 in the interest of protecting medical scheme members.

The Council for Medical Schemes (CMS) has concluded a settlement agreement with the South African Medical Association (SAMA) in respect of complaints lodged by members of scheme pertaining to the use of Modifier 0019(b) and Modifier 0005 with procedural code 1348  in the Doctors’ Billing Manual; for which SAMA is the licenced publisher (the Medical Doctor’s Coding Manual).

The CMS is mandated to protect the interest of medical scheme members at all times and consistent with this, received a number of complaints wherein members of schemes were complaining about the tariffs charged by Health Practitioners, more specifically by neonatologists or paediatricians wherein the said health practitioners billed an extra 50% to the tariff payable for neonates requiring intensive care in accordance with the application of Modifier 0019(b).

On 4 July 2013, CMS self-referred two complaints against SAMA to the Competition Tribunal under case numbers CRP065Jul13 and CRP066Jul13.

The complaint referral under case number CRP065Jul13 relates to the insertion of a descriptor, namely Modifier 0019 (b) into the Manual which was endorsed by the South Africa Paediatric Association (SAPA).

The CMS alleged that this decision by SAMA and SAPA had the effect of entitling neonatologists or paediatricians to bill an extra 50% to the tariff payable for neonates requiring intensive care. CMS alleged that this conduct amounted to directly or indirectly fixing a purchase or selling price or any other trading condition in contravention of section 4(1)(b)(i) of the Competition Act (the SAPA Complaint). CMS further alleged in the SAPA Complaint that SAMA’s conduct constituted a breach of its 2004 consent order.

The complaint referral brought by the CMS under case number CRP066Jul13 related to alleged conduct by SAMA and the Society of Cardiothoracic Surgeons of South Africa (SOCTSA).  In the SOCTSA complaint, the CMS alleged that a ‘billing manual’ prepared by SOCTSA, and in particular, the guidance to members on how to apply modifier 0005 in respect of certain procedures amounted to a decision of an association of firms to fix prices or trading conditions in contravention of section 4(1)(b)(i) of the Competition Act.  CMS alleged further that SAMA had also contravened this section of the Competition by endorsing and offering support to SOCTSA members applying the billing manual to their invoicing practices.

During December 2013, SAMA filed a review application against CMS, the Registrar of CMS and others, in respect of the CMS decision to refer the SAPA Complaint and the SOCTSA Complaint to the Tribunal; in the Pretoria High Court.  In the intervening period, there have been a number of interlocutory proceedings between the parties, including an appeal to the Competition Appeal Court.

Given the length of time and the sizeable costs involved and pursuant to extensive discussions to reach resolution to the issues at hand, CMS and SAMA subsequently agreed that it would be best to enter into a settlement agreement with the view to bring an end to the source of the complaints from scheme members in respect of the application of Modifier 0019(b) and Modifier 0005 in accordance with the billing manual and, to request SAMA members to abandon any claims associated with the use of the said modifiers.

It is therefore against this background that the settlement agreement was concluded between CMS and SAMA.

Advice to medical scheme members and all affected parties

A commitment from SAMA has been secured to provide its members with the list of all complaints received by the CMS with the view of recommending its members to abandon the claims, this initiative may prove to be fruitful for medical schemes beneficiaries.

The individual complaints which were lodged by members of schemes in respect of the application of Modifier 0019(b) and Modifier 0005 in accordance with the billing manual may be resolved by the proposed settlement and as such, provide relief to scheme members given that the matters referred to the Competition Commission is a price fixing complaint and as such, would not address the individual members schemes complaints .CMS therefore considers that the settlement agreement results in a better outcome for scheme members than continuing with the litigation process before the competition authorities.

CMS wishes to advise that it will be embarking on a process to resolve any outstanding complaints lodged in respect of the use of modifier 0019(b) and modifier 0005 with procedural code 1348 respectively. The said process will entail engagements with all key stakeholders which include but not limited to, SAMA, its members, members of schemes who previously lodged complaints with CMS, the attorneys of both parties as well as the Health Professions Council of South Africa.

The fundamental aim of these engagements is to remove Modifier 0019(b) from future publications of the Manual; ensure that Modifier 0019(b) will not appear in the 2021 calendar year edition of the electronic version of the Manual and the existing (2020) electronic version of the Manual will be amended to include an erratum; and that those individual members, who have existing disputes with medical schemes and patients relating to the application of Modifier 0005 with procedural code 1348, will be recommended by letter from SAMA to abandon their claims in those disputes.

The CMS reiterates its mandate and commitment to protecting the interests of medical scheme members.